According to the New Hampshire Housing Finance Authority (NHHFA), New Hampshire hit record lows for the number of home foreclosures this decade with only 133 foreclosure deeds filed in February 2015. 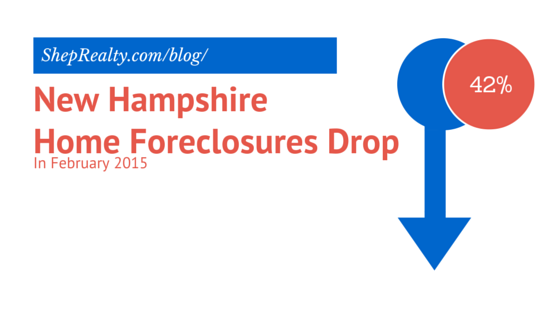 Not only was this (133) the lowest number of foreclosures the state has seen this decade, but also it was 42% less than those filed just last year in February 2014. That means in one year, we have seen a dramatic decrease in the number of people who have lost or are at risk for losing their homes to foreclosure.

Additionally, the number of foreclosure auction notices in February dropped even more from February of last year, down 60%, to only 100. It is rare for this number to be lower than the number of filed foreclosures (133) because it is a gauge of the number of people who could lose their homes in the coming months.

Compared to five years ago, so far in January and February of this year foreclosure filings are a whopping 60% lower than they were two months into 2010.

So, why are we seeing these drastic improvements in the number of New Hampshire home foreclosures both long-term and more recently in just the last year? There are multiple contributing factors. “The NHHFA attributes the improved numbers to an improved economy, and the fact that some banks are allowing short sales rather than taking borrowers’ homes.” (NH Business Review)

Along with the improving economy and banks allowing more short sales, new initiatives have cropped up specifically to assist NH homeowners at risk of losing their homes to foreclosure. This recent article celebrates the success of the HomeHelpNH counseling program that helped 750 households avoid foreclosure over the last two years.

Whatever the factors, these improved numbers are a good sign looking toward the spring that we’ll continue to see fewer home foreclosures in New Hampshire in 2015.

Thanks for visiting! If you've made it this far, you may want to start a new search or view our listings. Need help? Contact us today to get started.